Heroin is an opioid that they make from the opiate morphine. It is a synthetic form of the pain killer that originally came from the opium poppy in Asia. Heroin is typically a white or brown powder or in the case of Black Tar Heroin, it is a black sticky substance resembling tar. According to the National Institute on Drug Abuse, over 4 million Americans have used heroin at least once.

Since heroin is so prevalent in the United States, it is important to know the signs of heroin addiction. If you are using chances are you are addicted to it. There are physical, psychological, and social signs that you are either addicted or becoming addicted to heroin.

Signs of Heroin Use

When someone is using heroin they experience the side effects of the drug. These side effects, although not a sign of addiction, are a good indicator that the person is at the very least using heroin. The physical signs are:

These symptoms all are due to the heroin leaving the body. In times of extreme withdrawal, these symptoms are very severe. They can be debilitating if not treated, although they are rarely fatal.

Many of these signs are also signs of addiction. Generally if someone is experiencing withdrawal symptoms, there is a good chance they are addicted to heroin. 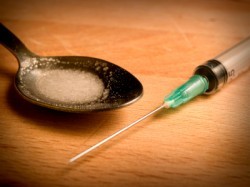 Heroin addiction can cause a variety of changes in appearance.

People who are addicted to heroin show physical signs of the addiction. These physical signs happen as they continue using the drug. The most common signs are:

o track marks or scaring around the elbows or other popular injection sites.

o low or no appetite,

All of these signs are visible when someone is addicted to heroin. As the addiction continues these signs get worse. Most people who first start using can hide these signs with make-up, eye drops, and other methods. The psychological signs are not as easy to hide.

Psychological Signs of a Heroin Addict

The psychological signs of a heroin addict start very subtle but gradually grow to being very noticeable. The majority of these symptoms become uncontrollable as use and the addiction grow. A few of these signs are:

These psychological effects are often accompanied by behavioral and social changes.

Behavioral Signs of Addiction to Heroin

The behavioral signs of heroin addiction are usually obvious. A few of these signs you should know about are:

Most addicts begin with subtle changes and move towards other more permanent ones. According to the National Library of Medicine’s publication Brief Interventions and Brief Therapies for Substance Abuse, the person does not need to want to stop using drugs. An intervention or forced rehabilitation sometimes works although it is easier if they want to stop using on their own. Recognizing the signs of heroin addiction, is the first step to helping someone overcome their addiction.

Alcohol addiction is one of the most, if not the most, difficult addictions for a person to overcome. Alcohol addiction requires treatment for most people. Fortunately, there are various types of alcohol rehab from which a person can choose. When a person develops an addiction to alcohol, which is the compulsive need to continually seek out….

What Happens in Drug Rehab Centers?

There are more than 14,500 specialized drug treatment facilities in the United States. These facilities provide counseling, behavioral therapy, medication, case management, and other types of services to persons with substance use disorders to help assist in their recovery from addiction, according to NIDA. Drug abuse and addiction are treated in physicians’ offices and mental….

Recognizing the Signs of Drug Addiction

Are you struggling with life, trying to keep everything from spiraling out of control but not matter how hard you try you just keep using drugs? You feel helpless and ashamed, you’ve isolated yourself from friends and family, you miss work or school regularly because you don’t “feel” well but no matter what you do,….

Where Can I Find Rehabilitation Centers Near Me?

The decision to enter drug treatment often comes with much deliberation and pain. After so many months or years of drug abuse, getting needed treatment help often becomes the only viable option. When asking the question, “Where can I find rehabilitation centers near me?,” gaining access to the vast array of resources available can go….

How to Evaluate a Rehab Center

Internet Addiction – What is it?

Most of us use the internet on a daily basis to stay in touch with friends, family and coworkers, to buy items or to find information. The internet has something to offer for pretty much anyone of any age. At what point does daily internet use become internet obsession? More and more time is being….

When it comes to abusing drugs and alcohol, the consequences can be extreme. There are legal ramifications, damage to family relationships, and issues that arise at work. But a common occurrence that doesn’t get a lot of light shined on it is the relationship between addiction and homelessness. Stability Is Hard for Addicted Individuals Homelessness….

Warning Signs of Suicide & When to Get Treatment Help

If ever there was a “silent” epidemic, suicide rates across the U. S. would most definitely qualify as no one wants to talk about this condition. According to the Centers for Disease Control & Prevention, suicide ranked as the 10th leading cause of death in 2013, which totaled out at 41,149 cases. This number amounts….