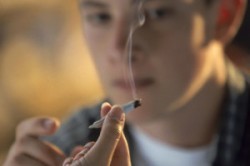 Get help for your teen who is addicted to smoking pot!

A recent survey of high-school students has found than nearly a quarter of the nation’s twelfth graders have smoked pot in the past 30 days and nearly 40% of them report having smoked marijuana in the past year. The survey also found that nearly 10% of high school seniors report smoking pot regularly—on a daily basis.

While the numbers were significantly lower for those in tenth grade—with only 17% reporting use of marijuana in the past 30 days and less than 5% smoking pot on a daily basis, there is still reason for alarm at these statistics. Marijuana, though not typically deadly in and of itself, has long been considered the “gateway drug” which leads to the use of other more serious drugs. Additionally, young people who smoke pot can suffer from a lower IQ, reduced cognitive abilities in adulthood and other long term consequences.

Unfortunately, many high school students do not perceive marijuana as a dangerous or harmful drug and this misconception has led to an increase in the use of the drug amongst those in 10-12th grades. In fact, a survey has found that only 41% of eighth graders believe that occasional use of marijuana is dangerous and less than 70% believe that regular use of pot is harmful—these numbers are significantly lower than those from the early 1990s.

Studies show that almost all 12 graders (80% anyway) believe that it’s safe to smoke pot on occasion with little risk and less than half believe that regular use of marijuana could be harmful. These are the lowest rates we’ve seen since before the 80s.

Teens should be better informed about the dangers and risks associated with marijuana use. Heavy use of marijuana during the adolescent years can lead to long term consequences including:

Additionally, studies show that as many as 90% of addictions have their roots in the teenage years when children or adolescents first begin to test the waters of substance abuse. Smoking pot can have a major impact on the risk of a teen becoming addicted to other, more serious drugs in the future.

If you think that your teen is smoking pot or if you know a teen who smokes marijuana regularly, consider seeking professional help. Rehab centers for teens can provide guidance and education to teens in an effort to help them better understand the dangers associated with smoking pot.

Does My Loved One Need Prescription Drug Rehab?

If someone you know is addicted to one or more types of prescription drugs, they should attend formal drug rehab. You may not be sure whether or not your friend or family member is truly addicted, but by making some careful observations, you can usually see if they have a severe problem. If they do,….

The decision to seek the help of a rehab center is already courageous and difficult for most addicts to make. Then comes the process of choosing between long-term rehab and short-term rehab options. Of course the initial desire to consider short-term treatment is usually what pops up. Generally, nobody wants to consider spending months in….

Alcohol, though legal for people over the age of 21, still causes detrimental consequences. The fact that alcohol is a legal substance is likely the reason why the negative role that alcohol plays in the community can be seen in nearly any situation including school, home, special events and even work. It doesn’t really matter….

Ask these 10 Questions Before Entering a Treatment Program

According to the National Institute on Drug Abuse, there are a variety of treatment options available. Which one you choose is an extremely difficult and important choice. You should ask some questions before you choose a program to make sure that the program is right for you. 1. Do I want Inpatient or Outpatient Care?….

Can You Succeed in a Rehab Center If You Reject 12 Step Programs?

For a lot of people, 12 step programs, like Alcoholics Anonymous, are mistakenly assumed to be part of all drug and alcohol treatment. For people who reject the fundamentals of the 12 step model, such as belief in a higher power, this confusion may lead to people avoiding rehab because they believe they will either….

Which Type of Rehab Center is Right for Me?

There is more than one type of rehab center, and while they all have their merits, it can help to compare them in order to find out which one is right for your needs. Make sure to ask yourself what aspects of a treatment program are most important to you before you begin, and it….

What to Look for When Touring a Rehab Center

One of the best things you can do to help prepare yourself to become a patient at a rehab clinic is to tour the facility first. This will allow you to find out if the center will be beneficial to your recovery and if you will be comfortable receiving treatment there. But it is important….

Syracuse has a new, state-funded addiction treatment center called the CUSE Recovery Community and Outreach Center. This facility will offer New Yorkers in the Syracuse area the chance to recover safely from opioid and other types of drug addiction syndromes. Among its treatment options will be peer group support, social games and activities, workforce training,….

Food Addiction vs. Drug Addiction: How are they Alike?

For years, there has been a debate on whether or not there are similarities between food and drug addiction. However, studies have shown that both addictions have similar characteristics. There are many ways a food addiction and drug addiction are alike. Reward System in the Brain The most relevant similarity between these two addictions is….