Heroin is an extremely powerful opiate made from opium. Opium is an ancient drug that was used as a painkiller and social distraction for centuries. Its more refined form, heroin, is currently illegal in the United States and several other countries. According to that National Institute on Drug Abuse, 2.4 million people age 12 and above have used some form of heroin. Of that 2.4 million an estimated 96,000 are addicted to it. These figures are startling. Almost all heroin addicts try rehab and fail the first time. Physicians and counselors call this failure a relapse. If you are an addict or you know a recovering addict there are several signs of heroin relapse you should be aware of.

We can help you find treatment for addiction. Call 800-481-6320Who Answers? toll free anytime.

This is where relapse starts. A recovering addict will always miss the drug, it will always be in the back of the mind but this is different than the ordinary cravings. This is something new. They actively miss the drug as if it is a person or beloved pet. Longing for the drug is a sign that they are starting to relapse. At this point, you should remind yourself of what the drug did to you and your life.

Associating with people who use 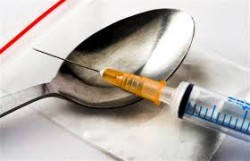 A relapse on heroin can have life-threatening consequences. Find help if you recognize the signs.

When someone misses the heroin, they start to associate with people who use again. They might be people they have cut from their life or new users who they have only just met. Hanging out with them is fun and the exposure to the drug is something that is familiar. The things they discuss and habits they have start to become the user’s own habits and topics. Cutting ties with these people again is difficult but necessary for continued sobriety.

How many times has someone said “just once won’t hurt,” or one of its variations. This is very dangerous thinking especially for a recovering addict. Each person is different but this mode of thinking is not. Everyone experiences it at least once in life. The more people try to convince themselves that once will not hurt, the closer they are to relapse. This is the point that talking to someone who is not a user helps.

Going places where heroin use is commonplace

Going to locations where people use such as houses or heroin dens is very dangerous for a recovering addict. Just like the people who use, places that use are accepting of the drug. They encourage those around them to use as well. By going there a recovering addict is putting themselves into a situation where using is easy, convenient, and sometimes safe from the legal consequences. If you find yourself driving past old haunts or even visiting them, it is time to talk to someone who can help.

During recovery, a user builds a support structure out of people, places, and beliefs. A good sign of relapse is when this structure starts to crumble. The user starts to argue with people who support the decision to quit. The people you normally talk to when you are in trouble are no longer the people the addict most wants to turn to. These are:

They begin to distance themselves from those that care and start to resent them for helping. Petty things sometimes get in the way of seeing what is happening. According to the Substance Abuse and Mental Health Services Administration, a solid network built with friends, therapy, and people close to you helps in recovery and helps to prevent relapse. Losing this network can cause a breakdown and an eventual return to the drug. When this starts, you need to mend the relationships and rebuild the support network.

Denying what the drug destroyed

Most people go into recovery because aspects or all of their life was destroyed by their drug use. People who are relapsing start to ignore or deny what the drug did to them. They begin to think of the times they were using as happier or better than things in their life now. They sometimes purposely forget why they quit and why they are healthier now. Some people keep reminders of what was lost to remind them when they have the urge to use again. These antitriggers are often helpful to prevent relapse.

Dropping out of treatment

Someone who is about to relapse inevitably discontinues treatment. They stop doctor’s appointments and skip counseling sessions. They drop out of their peer support groups and disappear from their family. They gradually and completely discontinue their treatment. Many will sell their methadone to other drug users for money to buy heroin. This is one of the final signs of relapse. Although going back is hard, it is not impossible to speak to the doctor or therapist after cancelling several appointments and going back to the drug. They tend to care more about continued recovery than the accidental relapse.

Giving in to the drug

Regardless of why you do it, these signs lead to eventually giving in to the drug. This is the high point of relapse or the peak of it at least. Many people do not recognize the signs that they are slipping until it is too late and they get another taste of the drug. After that, the drug has them back in its clutches. You do not have to go down this path. If you know the signs of heroin relapse and counteract them as they come up you can continue your recovery without a hitch.

How Rehab Centers Help You Overcome an Alcohol Abuse Problem

Of all the known addictive substances, alcohol remains the most accepted in terms of the place it holds within American society’s customs and norms. For many struggling with alcohol abuse problems, what started out as a casual, commonplace indulgence morphed into an out-of-control behavior that slowly took over their lives. The type of help available….

The Dangers of Binge Drinking & When to Consider Getting Treatment

As one of the more dangerous forms of recreational alcohol use, those who engage in binge drinking do so for one primary reason: to get drunk, quickly. Technically speaking, binge drinking entails consuming five or more drinks in two hours for men, or four or more drinks for women in the same amount of time…..

You May Need Alcohol Rehab If…

You’re a drinker. Maybe you always have been. But it’s not a problem. Or is it? According to the Substance Abuse and Mental Health Services Administration (SAMHSA), drinking is excessive for men who drink four to five drinks at one occasion and women who drink two to three and that for over 17 million Americans,….

The Importance of Long Term Rehab Centers for Women in Recovery

According to the National Institute on Drug Abuse, the treatment needs for women who abuse substances are different from those of men. Women are inherently different in the way that they react, recover, and bond. Women are more likely than men to seek treatment for substance abuse. They are also more likely to struggle with….

Can Suicide Treatment Centers Help My Loved One?

Suicide & Mental Illness More oftentimes than not, someone who’s considering suicide is dealing with overwhelming emotional and/or psychological problems. According to the American Family Physician, over 90 percent of people who commit suicide struggle with one or more psychiatric disorders, including substance abuse. In effect, it’s not the psychological dysfunction that increases suicide risk,….

What is not Allowed at Rehab

One of the hardest parts of drug addiction is admitting that you have an addiction that you need help with. Knowing this is very debilitating and sometimes embarrassing. One of the things that is even more humiliating is having someone go through your belongings, telling you what you can and cannot have. There is however,….

Are Free Inpatient Rehab Centers Too Good to Be True?

Free inpatient rehab centers actually do exist. Though these facilities are not as common as paid inpatient facilities, they can be found and patients in need are able to receive 24-hour care in a controlled environment which can significantly help their chances of making a successful recovery from addiction. How Many Facilities are Free? According….

Telltale Signs of Addiction and the Need for Help

It may be simple to determine if an individual is addicted to drugs or alcohol once they have been using for many years and the addiction has progressed to such an advanced stage that they use daily, suffer withdrawal symptoms when they aren’t using and are clearly in trouble. Unfortunately, by this point addiction has….

Are There Christian Rehab Centers for Teens?

The teenage years can be one of the most difficult periods in a person’s life. Teens struggling with alcohol and drug abuse issues have an especially hard time finding their way. Watching a teen fade away while addiction takes over his or her personality can quickly drain the life out of a family. According to….