How Hollywood Gets Rehab ALL WRONG

There are a lot of things that Hollywood gets wrong. This is particularly true when it comes to drug addiction and rehab. Unfortunately, with actors, actresses, and other famous people do nothing to help. By flitting in and out of rehab as if they are changing clothes, all they do is perpetuate the myths. The feature films and Television series about rehab do nothing to correct the problem either. Many of them get the idea of rehab completely wrong in many respects.

Rehabs are Not Country Clubs

Often the rehab is set in a beautiful countryside location where people play tennis, ride horses, and generally wander about freely as they nonchalantly recovery from drug abuse. Many of these drug rehab portrayals likewise depict rehab in a prison-like atmosphere with guards, needles, and ever watchful staff. Neither one of these depictions is entirely accurate.

While some rehabs are set on country grounds most have very strict rules. Rehab is hard work not just socializing or playing around. Some rehabs have a locked ward but these are more like hospitals than prisons. Many of them have bits of both types portrayed by movies and television. 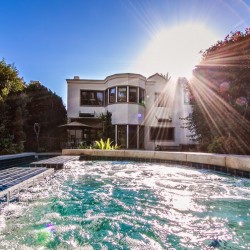 Although luxury rehabs do exist, they still have rules and treatment plans that must be followed.

With your favorite stars going in and out of rehab on what seems to be a weekly basis, it is difficult to not think that drug use is glamorous and rehab a part of it. Not many stars show the true side of what drug addiction and rehab actually consist of. If Hollywood is to be believed, rehab is fashionable and drug use is a positive thing. Unfortunately, teens and young adults want to model this behavior. Without accurate depictions of drug use and positive role models who do not choose drugs, it is impossible to prevent drug use and addiction.

According to the National Institute on Drug Abuse, there are many types of addiction treatment. Unfortunately, many of the movies and television shows advocate just 12 step programs. The success rate for 12 step programs is not accurately known.

Each person is an individual and no one treatment works for everyone. The success of 12 step programs in the movies is greatly exaggerated. Although many treatment programs contain 12 step programs, this is not the only thing they contain.

Addiction is Often Portrayed as Immoral Behavior Rather than a Disease

In many movies, the link between drug use and immoral behavior is greatly exaggerated. This leads to the conception that drug use is an immoral behavior that needs to be punished. Rehab is portrayed as punishment or criminal. By portraying treatment as something shameful, Hollywood essentially stops people from seeking the treatment that you need to get and remain sober.

Alcohol Rehab Myths and Why You Shouldn’t Believe Them

Where to Find the Truth About Rehab

In order to make a informed decision about rehab, you need all the facts. For the facts, call 800-481-6320Who Answers?. We can help you sort out fact from Hollywood fiction.

How Bad Does Addiction Have to Be Before Someone Should Seek Help at a Drug Rehab Center?

For some people, addiction has to reach the brink of disaster before they realize that it’s time for help. For others, the addiction may result in premature death before help is ever even sought. So, how bad does your addiction have to be before you seek help at a drug rehab center? It depends on your individual needs,….

How Teen Drug Rehab Can Help Your Child

Teens who struggle with addiction will more than likely need to attend formal rehab in order to recover. Addiction and drug abuse recovery is difficult even for adults to manage, especially alone. As a parent, the best way to help your child is to seek formal treatment and provide support as he or she attempts….

In the past 10 years, teen drug abuse has seen significant increased and some minor decreases along the way. Unfortunately, the number of teens who are now using dangerous drugs is seeing an all-time high that has not been reached in the prior 20 years. Teens today aren’t just experimenting with pot or alcohol, today’s teen drug….

As stated by the National Criminal Justice Reference Service, “In many ways, hardcore drug users are isolated from society. Their addiction affects not only them but also their families and friends as well as the larger community.” And when an individual needs to attend inpatient care to help them cope with addiction and begin to….

Methods of Treatment in Rehab for Anxiety

Anxiety is a natural response to fear or a perceived threat, but, for millions of people, it is persistent and uncontrollable, interfering with daily routines, social functioning, and their ability to live a healthy and satisfying life. Methods of treatment in rehab for anxiety combine various types of counseling, psychotherapy interventions, and possibly medications to….

Heroin is an extremely powerful opiate made from opium. Opium is an ancient drug that was used as a painkiller and social distraction for centuries. Its more refined form, heroin, is currently illegal in the United States and several other countries. According to that National Institute on Drug Abuse, 2.4 million people age 12 and….

Alcohol addiction is one of the most, if not the most, difficult addictions for a person to overcome. Alcohol addiction requires treatment for most people. Fortunately, there are various types of alcohol rehab from which a person can choose. When a person develops an addiction to alcohol, which is the compulsive need to continually seek out….

Are there Regulatory Agencies for Rehab Centers?

Each rehabilitation center should be accredited by at least one agency and should have a remark by the Council on Rehabilitation Education. These agencies make sure that the rehab facilities perform and render the basic standards of care. When you are seeking at treatment program it is extremely important that the facility you choose is….