Close relationships expose partners to the very best and the very worst that each has to offer. While the occasional argument or disagreement can be expected within any ongoing relationship, abusive behavior towards another develops out of a misuse of power and control.

Domestic violence operates within a fear-based relationship structure that can be physical, sexual, social psychological and even financial in nature. Episodes of violence can be ongoing or occasional depending on the circumstances of the relationship.

While women tend to be victimized more often than men, anyone can become a victim under the right circumstances. Being able to spot early warning signs of domestic violence can help you take steps towards getting needed help and ensuring your safety along the way.

Patterns of domestic violence tend to serve one overall purpose: to exert control over another for the purpose of getting one’s way. Whether it be through emotional insults, physical abuse or sexual assault, the abuser uses some form of coercion as a means for getting what he or she wants out of the relationship.

According to the Bureau of Justice Statistics, nonfatal domestic violence trends between the years 2003 and 2012 include the following: 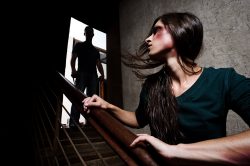 The majority of domestic violence incidents occur between romantic partners.

Call our helpline at 800-481-6320Who Answers? to see if your insurance will help pay your rehab costs.

Signs to Watch for

Domestic violence can develop under most any circumstance where there’s a marked imbalance of power of and control, regardless of age, income level, ethnicity or education level. People most at risk of becoming victims of domestic violence include:

Relationships that hold a potential for domestic violence center around the abuser in terms of his or her choosing to use violence as a means for exerting control. According to the Indian Journal of Community Medicine, assumed gender roles and family structures, such as patriarchal versus matriarchal have some bearing over how the stronger partner goes about getting his or her way.

As far as the potential abuser goes, factors that increase the likelihood of violent behavior developing within the context of a relationship include:

These circumstances introduce a certain degree of stress into a relationship, be it from past conditioning or current, extenuating circumstances. Under these conditions, elevated frustration levels greatly increase the likely an abuser will act out.

If you suspect you or someone you know may be seeing early warning signs of domestic abuse in your home and don’t know where to turn, please don’t hesitate to call our toll-free helpline at 800-481-6320Who Answers? to speak with one of our phone counselors.

The Correlation Between Drugs And Violence

Why You Should Fake It Until You Make It

When you start drug and alcohol treatment, it can feel overwhelming. You may be at a rehab center, surrounded by people you don’t know, telling you things you don’t care about. While you want to get sober, you may feel lost and like you’re never really going to get it. Instead of getting down on….

Why is It Important to Attend Professional Rehab?

Many people believe they can get over their addictions on their own and without the help of professional rehab. Unfortunately, though, this option is often much more dangerous and usually more unsuccessful than attending professional care in the hands of healthcare workers. Addiction Changes the Brain Most people cannot beat addiction through sheer force of….

Realizing that Co-occurring disorders are often at the root of many addiction cases, Seasons Recovery Center helps addicts break the cycle by providing treatment for co-occurring disorders. It may come unexpected but Seasons Recovery Center of Malibu, California has seen the situation occur hundreds of times before – it all begins with an addict struggling….

The decision to seek help for addition is already a difficult decision to make and then trying to determine how you can afford such treatment is even more concerning. Figuring out how to pay for drug rehab is often the one thing that holds people back from getting treatment. Most importantly, you can’t wait to….

About Drug Addiction and Christian Rehab Centers According to the National Institute on Drugs Abuse, there were approximately 24 million people twelve years of age or older that needed treatment for an illegal drug or alcohol abuse problem in 2009. However, only 2.6 million of these people who needed treatment actually got it. Drug addiction….

Besides alcohol, marijuana exists as the most commonly abused drug among all age groups. According to the National Institute on Drug Abuse, over 29 million people reported using marijuana as of 2009. While legal restrictions surrounding marijuana use may be loosening, this drug does still carry addictive properties. Anyone considering entering marijuana rehab has likely….

If you think that recovery from addiction is out of the picture because you can’t afford the cost of rehab, think again! Low cost drug rehab centers are making treatment and rehabilitation readily available to those who otherwise would not be able to afford such care. These affordable rehabilitation programs offer patients counseling, therapy, a….

How Alcohol Abuse Progresses into Alcoholism

Alcoholism is not some disease that just appears over night. You don’t just wake up one day and all of a sudden you’re an alcoholic. Alcoholism begins with alcohol abuse and over time as drinking progresses from being a fun thing to do socially and on occasion to being a damaging situation that is out….

The Governor’s Office of Highway Safety recently funded the making of three advertisements, which will be shown during Atlanta Braves baseball games. Among these are ads that promote following the speed limit, wearing one’s seatbelt, and perhaps most crucially, avoiding drunk driving. The DUI spot is especially important for sports fans to see, as watching….

Getting the Most out of Drug Rehab

Drug rehab is a great opportunity for you–if you take it for what it’s worth and work with it! If you simply walk into drug rehab with the intention of not doing your part, then there’s a good chance that the treatment won’t do a whole lot for you. It’s an investment in your future, an….

Calls to numbers on a specific treatment center listing will be routed to that treatment center. Additional calls will also be forwarded and returned by one of our treatment partners below.

Calls to any general helpline (non-facility specific 1-8XX numbers) for your visit will be answered by ARK Behavioral Health, a paid advertiser on RehabCenters.com.