Holiday Season Blackout Episodes and the Need for Alcohol Rehab

Alcohol abuse has a way of progressing along, all on its own, gradually diminishing a person’s ability to control his or her intake. Before long, excess drinking brings on blackout episodes that increase in frequency and duration over time. The holiday season in particular offers any number of opportunities to engage in drinking behaviors, allowing someone who struggles with alcohol abuse to blend in with the crowd.

For someone who’s experienced blackout episodes in the past, the holidays pose a considerable threat to his or her physical and psychological well-being. For these reasons, entering alcohol rehab before the holiday season hits full stride can help prevent an alcohol abuse problem from causing irreparable damage in your life.

Alcohol Abuse during the Holiday Season

Alcohol has remained an accepted part of American culture since the country’s very beginnings. The traditional “spiked” eggnog served at holiday gatherings offers a prime example of alcohol as an accepted American pastime, especially during the holiday season.

Considering the number of events, parties and family gatherings that take place during the holidays this time of year offers more than a few opportunities to drink in excess. Likewise, anyone battling a drinking problem becomes even more so vulnerable during the holiday season.

The holidays also come with added pressures to meet family obligations as well as the money that goes into buying gifts. These pressures can further aggravate an already troublesome drinking problem. 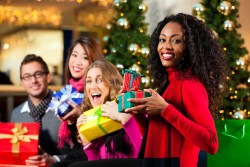 Alcohol consumption is a holiday tradition among many Americans.

Alcohol has a cumulative effect on the brain, diminishing its ability to produce needed neurotransmitter chemicals on its own. Over time, this damage drives users to ingest larger amounts of alcohol in order to experience the desired “high” effect, according to the Scripps Research Institute. In turn, a vicious cycle of brain deterioration and increased drinking ensues.

After so many months of heavy alcohol consumption, drinkers start to engage in bingeing behaviors, consuming incredibly large amounts of alcohol at a time. Since alcohol acts as a central nervous system depressant, these practices can cause serious widespread health problems within a short period of time.

According to the National Institute on Alcohol Abuse & Alcoholism, someone who experiences repeated blackout episodes risks developing serious impairments in memory, learning and psychological functioning. Considering the brain’s steadily increasing tolerance for alcohol combined with the pressures of the holiday season and the ample opportunities to engage in drinking, the risk of experiencing blackout episodes increases considerably for someone who has a drinking problem.

The Need for Alcohol Rehab

While spending time with friends and family most distinguishes the holiday season from any other time of year, trying to keep a drinking problem in check during the holidays can quickly turn out to be a losing battle. In effect, the longer you wait to get needed alcohol rehab, the harder the recovery process will be.

Should I Attend a Long-term or Short-term Rehab Program?

Choosing an addiction treatment program can be a difficult process, especially when there are so many different types of centers and programs available. Because time spent in treatment is usually very important to most recovering addicts, you may be wondering if you should attend a long-term or short-term rehab program. It is important to assess….

Rehab is only the first step to sobriety, after a person leaves rehab they will have to continue to remain sober. This can be difficult, but there are programs and support options a person should utilize to help them in their life after rehab. About Alcohol Addiction Alcohol addiction is a chronic brain disease that….

There are many misconceptions about rehab and rehab centers, just about as many as there are about drug addiction itself. According to the National Institute on Drug Abuse, rehab is an effective treatment for drug addiction and other addiction disorders. Since this is true, it is important to understand all of the things that people….

Society, Stereotypes, Second Chances: Addicts and the Challenge of Employment

For those seeking treatment for addiction, they may find many obstacles that make it difficult to return to a sense of normalcy. In the work place, addiction can result in termination of employment. It can also be incredibly difficult to find employment while in recovery when employers learn of a potential candidate’s history of addiction…..

Opiate addictions have seemingly taken the United States by storm, with an estimated two million Americans reportedly abusing opiates in 2009, according to the National Center for Biotechnology Information. The common practice of prescribing opiates to treat pain-related conditions has left those most vulnerable to addiction to fend for themselves. Recreational users also soon discover….

The Pros and Cons of Making Friends During Rehab

While it’s easy to say that you don’t go to drug and alcohol rehab to make friends, it’s bound to happen when you share the same living space with someone for weeks, engage in treatment together, and share the destruction that addiction has caused in your life. Some people discourage making friends during inpatient drug….

Relapse – The Rise and Fall of Drug Addiction

For those who struggle with drug addiction or alcohol addiction, relapse often becomes a fact of life. They rise up above the addiction only to be faced with the harsh reality of relapsing despite efforts to make positive change. Directors at many rehab centers report that it is not uncommon for them to admit patients….