Tobacco use rates have seen a 50 percent decline since 1965, though an estimated 69.6 million Americans reported regular tobacco use as of 2010, according to the 2010 National Survey on Drug Use and Health. In spite of this decline in number, tobacco use holds the number one ranking for leading causes of preventable death in the United States.

Tobacco use includes cigarettes, cigars, pipes and smokeless tobacco. With such a long history of tobacco production, the U.S. has gone through a range of dispositions towards this, now, harmful product. Once glamorized on stage and screen, the health dangers currently associated with tobacco use have placed it among so many other harmful addictions.

While some people can actually smoke on occasion, most who start smoking develop a habit that spins out of control. Signs and symptoms of tobacco abuse easily appear within a person’s daily routine. Meanwhile, the effects of tobacco on the brain work to perpetuate ongoing use much like heroin does.

The health effects from long-term tobacco abuse are widespread, with many eventually dying from this daily habit. Fortunately, people wanting to quit can take advantage of several different treatment approaches, though the will to quit ultimately determines a person’s success. 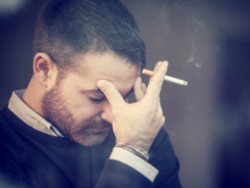 Tobacco smoke is linked to a number of health problems, most notably lung cancer.

Like any other addiction, tobacco addictions develop over time based on how the body absorbs and responds to it, according to the University of Southern California – San Francisco. As many people get into the habit of smoking after a meal, smoking with a cup coffee and smoking while drinking alcohol, environmental factors easily perpetuate the habit. Genetic factors can also make some people more susceptible to tobacco additions than others.

Since the “rush” from smoking tobacco can be felt within minutes of the first puff, each puff reinforces the next. This makes it fairly easy for an addiction to form over time. Ultimately, the inability to stop smoking separates the addict from the occasional smoker. With so many health reports laying out the dangers of tobacco, continuing to smoke in spite of the risks is a clear sign of addiction.

Symptoms of tobacco addiction become most apparent during times when a person attempts to stop using or goes a long time without a “fix.” Also known as withdrawal effects, these symptoms stem from the physiological changes that have taken place in the brain as a result of ongoing tobacco use.

According to the National Institute on Drug Abuse, common withdrawal effects from tobacco use include –

Withdrawal symptoms may show up as soon as a few hours after the last use. For people attempting to quit the habit, these effects normally peak after a few days and last for two to three weeks thereafter.

Behavioral or ritual-type factors can also make it difficult to maintain abstinence. Behavioral factors may take the form of –

In effect, both physical and psychological components work to keep a tobacco addiction alive.

Effects on the Brain

Once nicotine enters the brain, brain cells secrete high levels of dopamine neurotransmitter chemicals. This chemical works directly within the brain’s reward pathways, which regulate pleasure and pain sensations. With repeated tobacco use, the brain becomes dependent on tobacco’s effects. In the process, gradual structural changes in the brain eventually drive the addiction process.

Tobacco’s effects act as a stimulant on the body causes increases in blood pressure, heart rate and respiration. The cumulative effects from years of tobacco use damages nearly every organ of the body. In the case of cigarettes, added ingredients further worsen the effects of tobacco by leaving toxic residues inside the blood vessels as well as inside individual cells of the body.

Long-term tobacco use has greatly contributed to cancer rates accounting for one-third of all cancer deaths in the United States. Ninety percent of all lung cancer cases have resulted from tobacco. As tobacco use encompasses cigarettes, pipes and cigars, cancers involving the mouth, esophagus, larynx, kidneys and bladder can all result from long-term tobacco use.

Over 7,000 chemical additives appear inside the smoke from tobacco products. Tobacco smoke not only harms users, but also anyone in the immediate vicinity. Tobacco smoke has been linked to as many as 3,000 cancer deaths per year for nonsmokers as well as 35,000 deaths resulting from cardiovascular disease.

As far as cigarette smoking is concerned, data gathered by the National Institute on Drug Abuse include the following –

Treatments for tobacco addiction use nicotine replacement therapies as well as behavioral therapy approaches. While nicotine replacement therapies, such as patches, gums and inhalers help relieve the physical withdrawal symptoms, actual cravings for tobacco may still persist. Overall, these treatments increase the likelihood of breaking a tobacco addiction by two- to threefold depending on a person’s motivation to quit, according to the U.S. National Library of Medicine.