While no doubt an effective treatment medication, Ritalin is nonetheless a stimulant class drug that carries a high risk for abuse and addiction. When taken as prescribed, there’s little risk involved. The risk increases considerably for those who choose to ingest Ritalin for recreational purposes. Much like cocaine’s effects as a stimulant drug, Ritalin can damage brain and body functions when abused on a regular basis. 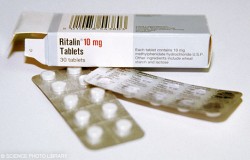 Ritalin, though effective for the treatment of ADHD, is an addictive stimulant with a high potential for abuse.

Ritalin, also known as methylphenidate, works by stimulating the body’s central nervous system functions. It does this by binding to specialized brain cell receptor sites, which cause dopamine chemicals to be released. Dopamine, a primary neurotransmitter, plays a central role in regulating impulse-control mechanisms within the brain’s motor inhibitory system.

With ongoing use, these effects start to take a toll on the body’s structures as well as weakening brain cell receptor functions.

Ritalin is classified as a Schedule II narcotic drug because of its high potential for addiction. The drug has a diminishing effect on dopamine brain cell receptor sites causing the brain’s tolerance level for Ritalin to increase on a continual basis. With increased tolerance levels, a person requires larger doses of the drug to obtain the same desired euphoric effects. In the process, brain cell receptors grow progressively weaker and eventually become unable to secrete dopamine under normal conditions.

According to the New York State Office of Alcoholism & Substance Abuse Services, when used for recreational purposes, Ritalin goes by a number of “street names,” some of which include:

Teenagers and college students can “illegally” purchase Ritalin for anywhere from $1 to $15 per tablet. Users typically crush up tablets and inhale or smoke the drug.

As with any other type of narcotic stimulant drug, even in cases where a person doesn’t have hyperactivity disorder, Ritalin enhances the brain’s ability to focus and concentrate; at least during the beginning stages of addiction. For this reason, many high school and college students abuse Ritalin as a way to improve their academic performance.

Physical signs of Ritalin effects typically take the form of:

Psychological signs of Ritalin effects include:

As with any addiction, the body’s ongoing demand for larger doses of Ritalin becomes the top priority in a person’s life. Eventually, users come to believe they need the drug in order to function normally in everyday life. Once users start believing they need the drug, they’ve crossed over from physical dependence to full-fledge addiction.

In this state, everything a person thinks and does centers on getting and using Ritalin. Inevitably, these effects start to show up in a person’s everyday behaviors.

After so many years of Ritalin addiction, the drug loses its ability to induce feelings of euphoria. At this point, a person keeps using in order to ward off withdrawal symptoms.

With stimulant-based addictions, long-term users often engage in a practice known as “binging.” Binging involves ingesting multiple doses of stimulants, one right after the other.

According to the U.S. National Library of Medicine, binging eventually becomes the only way users can get “high” once tolerance levels reach a certain point. This practice places users at significant risk of life-threatening effects.

Possible effects from binging behaviors include:

Ritalin injections offer the strongest, most intense “high” effects and so pose the greatest danger in terms of overdose deaths.