Obsessive compulsive disorder, commonly referred to as OCD, is a neurological disorder that causes unwanted thoughts and worries, or obsessions, that lead to repetitive behaviors, or compulsions. While it is normal for people to sometimes double check if they’ve locked their door, or to make sure they shut the oven off, someone with OCD may check these things repeatedly or have specific routines at rituals they have to go through to do things. The symptoms of OCD get in the way of everyday life and cause a considerable amount of distress for people.

People with obsessive compulsive disorder are sometimes aware that their obsessions and compulsions are irrational or excessive, but they lack control over them. However, most people who suffer from obsessive compulsive disorder do not believe that their thoughts or actions are irrational and once they do realize that what they are doing is irrational they have increased anxiety regarding the realization. Obsessions refer to frequent upsetting thoughts, and compulsions refer to the overwhelming urge to repeat certain rituals or behaviors. One common example of obsessive-compulsive behavior is for an individual who becomes obsessed with germs or dirt to compulsively and repetitively wash their hands.

Thankfully for people suffering from the disorder, there are treatments for OCD. Rehab centers for obsessive compulsive disorder use medication, psychotherapy, or a combination of the two to help people suffering from the disorder experience relief. For some people OCD gets so severe that it interferes in their daily life and makes normal functioning difficult. Treatment can help these cases, too. 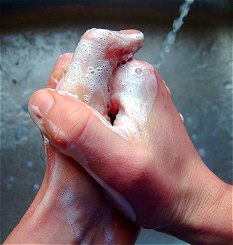 Some people with OCD have an obsession with germs that causes them to compulsively wash their hands.

In this page you’ll learn about:

People with obsessive compulsive disorder experience a variety of obsessions and compulsions that interfere with their everyday lives. It is not uncommon for a person with the disorder to become demoralized or depressed, and feelings of anxiety, disgust, or intense discomfort are common.

According to the National Institute of Mental Health, some common symptoms of OCD include:

The National Alliance on Mental Health provides the following examples of behavior in people with OCD:

First off, in making an OCD diagnosis the doctor will ask about obsessions and compulsions. For obsessions, a person must have thoughts, impulses, or images that they are unable to get rid of even though they do try. The purpose of compulsions is to relieve obsessions.

The Centers for Disease Control and Prevention assert that the following conditions must be met for the diagnosis to be made:

Through a person with OCD’s life the condition can take different courses, according to the National Institute of Mental Health. For some the symptoms come and go, for others they ease over time, and then for some they get worse. In some cases the symptoms of obsessive compulsive disorder become so severe that the person cannot work or keep their home in order.

Scientific research suggests that obsessive compulsive disorder is a result of a chemical imbalance in the brain. People with brain injuries sometimes develop OCD, which suggests it is a medical condition. In addition, according to a study described by the National Alliance of Mental Health, if a placebo is given to people with panic attacks or people who are depressed, 40 percent will report an improvement in symptoms. For people with OCD, only 2 percent feel better with a placebo. This also suggests that it is a biological problem.

Genetics also play a role in the development of obsessive compulsive disorder. If someone in a family has OCD there is a 25 percent chance that another immediate family member – a parent, sibling, or child – will have it. It is thought to be a dysfunction of certain parts of the brain, specifically the frontal lobe and basal ganglia, and treatment works on changing activity in those brain regions.

The neurotransmitter serotonin and a hormone called vassopressin have been studied and are thought to have a potential link to OCD.

Obsessive compulsive disorder is a chronic disease and although in some cases symptoms become less severe at times treatment is usually necessary. Treatment for obsessive-compulsive disorder may take the form of behavioral therapy, cognitive-behavioral therapy or drug therapy which includes prescription medications. Psychotherapy is often effective at treating OCD and many rehab centers will employ a combination of different forms of psychotherapy in conjunction with drug therapy to successfully help individuals who suffer from OCD and anxiety disorders.

Rehab centers that treat mental disorders or anxiety disorders provide the most effective treatments for obsessive-compulsive disorder. For most individuals who suffer from OCD, drug therapy alone is not enough to combat the symptoms of the disorder and a combination of antidepressants or antipsychotics in conjunction with behavior modification must be used to provide the optimal reduction in symptoms associated with obsessive-compulsive disorder.

For severe cases of OCD that do not respond to other forms of therapy or treatment, some rehab centers may use electroconvulsive therapy to reduce the symptoms of OCD but in most cases this type of treatment is not necessary. When such therapies and treatments prove ineffective for individuals who have obsessive-compulsive disorder a final resort is to have psychosurgery although this is another treatment that is not commonly sought. Psychosurgery is a process of placing a surgical legion in the brain to eliminate the symptoms of OCD. This treatment is performed at a hospital only after an individual has undergone several therapy sessions, counseling and treatment options at rehab centers first.