Manic Depressive Disorder, also known as Bipolar Disorder and Manic Depressive Illness, is a mental health disorder that causes dramatic shifts in a person’s mood as well as their energy level and general ability to function. According to the Office on Women’s Health, bipolar disorder usually develops in the late teen years or early adulthood, and most cases develop before the age of 25. The mood changes associated with the disorder are very serious and can lead to job loss, issues in school, damaged relationships, and can even lead to suicide.

Episodes of highs and lows associated with the disorder last anywhere from days to months, and they are usually interspersed with normal moods. Individuals with manic depression can go for years without having a major episode, meaning that for this time they would show no signs of the illness. Others, however, have persistent and severe symptoms which require constant attention and care.

There are treatments available for bipolar disorder, though not everyone who has the disorder is properly diagnosed or receives the proper treatments. The National Alliance on Mental Illness reports that roughly 40% of people who do not receive treatment for manic depressive disorder abuse alcohol and/or drugs. Other possible consequences of untreated bipolar disorder are job loss, divorce, and suicide.

How Common is Bipolar Disorder? 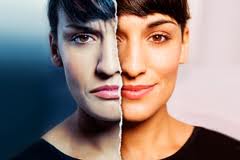 According to the National Alliance on Mental Illness, approximately 2.6 percent of the US population or 5.7 million Americans over the age of 18 is affected by manic depressive illness. Both sexes are affected equally, but women are more likely to experience rapid cycling and mixed states while men are at higher risk for early-onset bipolar disorder, according to the University of Maryland Medical Center. Bipolar disorder is thought to be genetic and frequently occurs within families. Family members of bipolar individuals are at higher risk for the disorder as well as schizophrenia, schizoaffective disorder, anxiety disorders, ADHD, and major depression. They also say that a typical individual will manic depression will experience 8-10 manic or depressive episodes over a lifetime, though some people have more or less.

Manic depressive disorder is more than just moodiness. The mood changes experienced by individuals affected by the disorder are very strong, and can sometimes make it impossible for them to function in everyday life.

People with bipolar disorder go through ‘mood episodes’, or distinct periods of time experiencing extreme emotional states. The two main types of episodes are manic and depressive, with manic states characterized by feeling overly joyful and overexcited, while extremely sad and hopeless feelings describe depressive states. It is possible, too, to have symptoms of both mania and depression during an episode, which is called a mixed state. Each of these states is characterized by specific recognizable symptoms. In addition, changes in energy, activity, sleep and behavior go along with episodes of mania and depression.

According to the National Institute of Mental Health, it is also possible for individuals with manic depressive disorder to have long periods of unstable moods rather than episodes of mania and depression. To identify an episode of bipolar disorder an individual must have the symptoms of a manic or depressive episode for most of the day for at least one or two weeks.

These are the specific symptoms of manic and depressive episodes according to the National Institute of Mental Health:

Here are the types and their properties:

Rehab centers for manic depressive disorder can make a proper diagnosis. The doctor making an individual diagnosis may conduct a physical exam, an interview, and lab tests. At this time any brain scans and blood tests cannot be used to identify the disorder, but they can be used to ensure that certain other health problems are not occurring, and are not causing the illness. Once other illnesses are ruled out, the doctor will likely conduct a mental health evaluation including questions about family history of mental illness. Close relatives will also be questioned about the family history and the individual’s symptoms as noted by them. Once diagnosed, a bipolar disorder rehab center will prescribe a treatment plan.

Thankfully for people struggling with bipolar disorder there are treatments that can help stabilize moods. Treatment is very important, too, as symptoms can worsen if left untreated and an individual may experience more frequent and more severe episodes than when they initially experienced signs of the disorder. On the other hand, with treatment the episodes of bipolar disorder are less frequent and less severe.

These are some of the common medications provided at rehab centers:

Mood stabilizing medications: These are usually the first choice in treating manic depressive disorder and most people with the disorder take them for years.

Atypical antipsychotic medications: These are sometimes used to treat bipolar disorder symptoms though they are often taken along with other medications.

Antidepressant medications: These are sometimes used to treat symptoms of depression in bipolar disorder and are often prescribed along with a mood stabilizer.

The National Institute of Mental Health advises that not everyone responds to medications in the same way and so several different ones may need to be tried to find the best treatment for a particular individual. In addition, the each of the above medications has different specific benefits and drawbacks, so a doctor will work to find the one that works best with the particular manic depressive disorder symptoms that an individual is feeling.

What Can You Expect from Treatment?

While there is no cure for bipolar disorder at this time, it can be effectively managed and treated. Continuous treatment is the best plan, rather than on and off. Even with proper treatment of manic depression, though, mood changes can occur.