Fibromyalgia is marked by chronic pain in the muscles and ligaments. There is no known treatment for fibromyalgia but physical therapy and prescription medications can help to alleviate pain and restore function. Fibromyalgia rehabilitation takes many forms including medications, therapies and self care at home.

For many years, fibromyalgia was not recognized as a true illness and for thousands of individuals who suffer from chronic fatigue associated with fibromyalgia misdiagnosis is very common. About 50% of all fibromyalgia patients are first diagnosed with at least one other condition prior to the correct diagnosis of fibromyalgia. For some patients, unnecessary surgery is another common factor the precedes fibromyalgia diagnosis. Most fibromyalgia rehabilitation will involve treatment for pain and counseling to address the misdiagnosis that may have previously been received.

Fibromyalgia is a disorder characterized by muscle pain and fatigue, especially in certain ‘tender points’. People with the disorder have these tender points where they feel pain when pressure is put there. This is most commonly the neck, shoulders, back, hips, arms, and legs. This disorder is often associated with other chronic pain conditions and arthritis.

Treatment for fibromyalgia can be difficult, and it is important to find a doctor or rehab center that has experience with the condition. 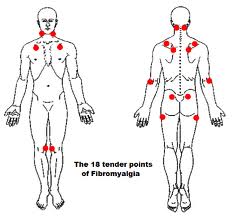 Individuals with fibromyalgia feel pain in some or all of the tender points indicated above.

The most common, telltale signs of fibromyalgia are the existence of tender points, pain, and fatigue. Tender points do not actually show signs of swelling though they feel more sensitive to the touch. The pain and fatigue associated with the condition can be debilitating.

Pain from the condition can be in one place or all over the body, and is often described as ‘radiating’, meaning it spreads to nearby areas of the body. Widespread stiffness, aching, and burning are often reported.

According to the University of Maryland Medical Center up to a third of people with fibromyalgia has depression, although the co-occurring disorder is often undiagnosed.

There are other symptoms that are common according to Medline Plus. These include:

People with fibromyalgia may have two or more coexisting chronic pain conditions, according to the National Institutes of Health. These can include chronic fatigue syndrome, endometriosis, inflammatory bowel disease, interstitial cystitis, temporomandibular joint dysfunction, and vulvodynia.

The condition is not easy to diagnose, and it can take up to five years for an individual to receive an official diagnosis. People with the disorder also may see many doctors before receiving the diagnosis because the main symptoms of fatigue and pain overlap with many other conditions. In addition, there is no diagnostic laboratory test for fibromyalgia, which makes the diagnosis difficult. To be diagnosed with fibromyalgia you have to have pain in 11 of 18 tender points for 3 months or more.

At this point in time the cause of fibromyalgia is unknown. The University of Maryland Medical Center speculates that physical injury, emotional trauma, or viral infections may trigger the disorder but there has been no definitive evidence regarding this. Some believe the disorder to be a chronic pain condition that is brought on by stress

The University of Maryland also reports that people with the disorder have decreased opioid receptor activity in the brain regions that regulate mood and the emotional response to pain. This may explain why people with this condition or also likely to have depression, and that they are less responsive to opioid painkillers.

Differences in the stress hormones and serotonin in the brains of people with fibromyalgia are present though there are no regular patterns across patients. This may indicate that the condition is not a brain disorder but is a result of the effects of pain and stress on the central nervous system.

The Centers for Disease Control and Prevention provides the following statistical information about fibromyalgia in the United States:

Fibromyalgia treatment usually involves a good amount of trial and error as there is no one reliably effective treatment. Cognitive behavioral therapy, medication, exercise and diet are all potential components to a treatment plan. While in treatment is important to understand that the goal is to relieve symptoms, not necessarily to cure them.

According to the National Institute of Arthritis and Musculoskeletal and Skin Diseases the treatment of fibromyalgia is not simple. First off, not all doctors are familiar with the disorder. Rehab centers for fibromyalgia are sure to have the types of doctors you need. Many family doctors and rheumatologists in particular are able to do this. The treatment approach will often involve several actors, including a doctor, physical therapist, and possibly other treatment specialists all of whom are very important.

Things You Can Do to Feel Better Now

There are some things that you can do to ease the symptoms of fibromyalgia at home. These are lifestyle changes that do take time to incorporate into your life, but if you are able to do so the reward will be worth it. These lifestyle changes are to your diet, exercise, and sleep routines.

Sleep: Part of the trouble with this condition is that it makes sleep difficult. Some things you can do to improve your quality of sleep are to:

Exercise: Getting regular exercise can help with your sleep routine and can help ensure your muscles are healthy and strong. Workouts do not have to be extremely strenuous, and should actually start out mild and then increase in intensity over time. Stretching before working out and even on off days can prove to be very helpful. Some potential workouts could be walking or swimming.

Diet: The University of Maryland Medical Center recommends that fibromyalgia patients maintain a diet which is low in animal fat and high in fiber. They also recommend lots of whole grains, fresh fruits and vegetables. Omega-3 fatty acids may be helpful for arthritic pain. These can be found in cold water fish or as supplements.

If you or someone you know suffers from fibromyalgia or chronic pain it is important to know that there are fibromyalgia rehabilitation centers that can help restore daily function and mobility and reduce the pain. Physical therapy, occupational therapy and other rehab centers can provide the treatment necessary to help patients who suffer from fibromyalgia to live independently.